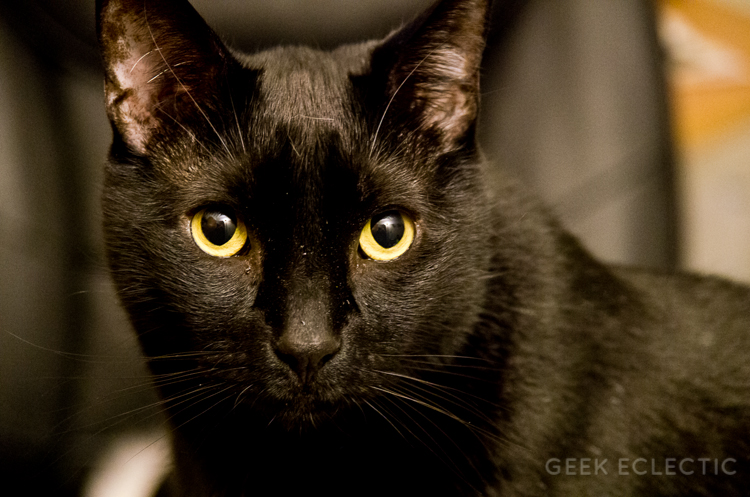 I’ve been buried in Android development and web design lately (although to be accurate, the latter is more figuring out the WordPress theme I purchased and less the nuts and bolts of what I would consider active designing). Even much of my hobby time lately has gone into this project – today’s trip to the cross stitch store was aimed at getting feedback on StashCache, not shopping for more stash.  (I failed to get feedback and failed at buying nothing.  Sigh.  But new stash!)

So leave it to the furry overlords to remind me that there is still reality to deal with.

Of our three, Problem Child lives up to his name in more ways than one – eating hair, getting onto the kitchen counter, humping blankets (yes, he’s fixed) – but perhaps the most obnoxious is that he doesn’t like covering up his own business in the litterbox.

I read somewhere (on the Internet, so it must be true) that this is a way that cats assert dominance or some such something. I don’t know. I don’t especially care. I’d just like him to stop, because while most of the cats I’ve known aren’t particularly aromatic in that sense, Problem Child is special.

Special enough that his rear end should be classified as a chemical weapon.

And until it gets covered up, well, it’s potent. Thankfully, once covered, the odor tends to dissipate fairly rapidly. Sort of how babies smell fresh once you finally get the diaper dealt with.

That’s why a few warning bells should have rung when the smell hadn’t dissipated by the time we got back from a short walk around the block. But I’m tired and have been focused on this WordPress installation and the pile of tutorials I need to write, which is why it took another 15 minutes or so to notice the smear of poop across the linoleum.

And that is why I was cleaning cat poop off my kitchen floor at 11:30 pm. My glamorous, exciting life-in-progress – reality checks provided by the furry overlords.