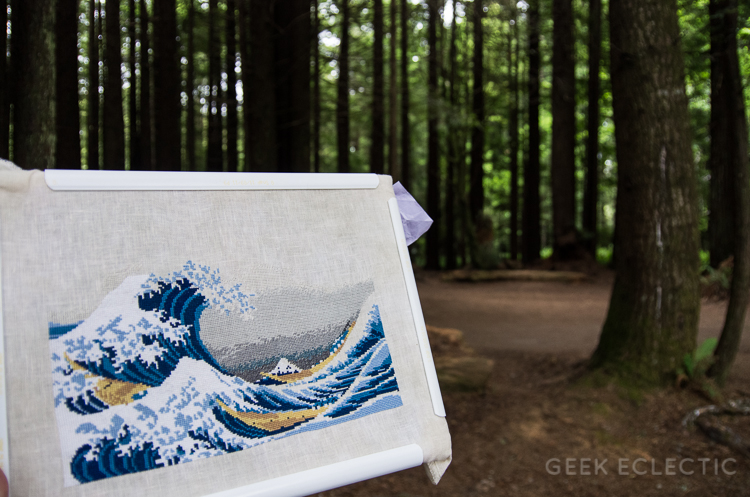 Well, that’s my experience, anyway. This one especially – I think The Other Half has really needed one for a while (and I have too) and …this just wasn’t long enough. It was good, just …not enough.

On the flip side, longer would have been less good too, because there were two new bug reports to squish when we came home. I have fixes to both of those out, and there’s a very tricksy one that continues to haunt around (it’s been reported twice so far, but I can’t successfully replicate it, which makes debugging …very challenging). I have a tentative fix for that pulled together but I am going to save it until there’s another update that needs to go out, since I’m not 100% certain it will fix the problem.

I did get some stitching time this trip. The advantage of the Sea Of White, of course, is that it doesn’t require a lot of thought or counting, so it’s very easy to fill in as I sit and listen to an audiobook or we’re driving along. Even these photos are a little out of date, because I filled in another pile while we were driving back home. 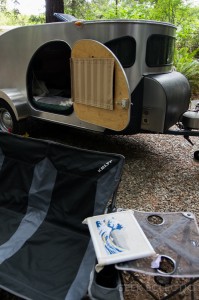 You can see our trailer, of course – our little teardrop! We had a great time camping in it for the entire trip, starting in the Sierras and ending up in the north, by the redwoods. There were a few short hikes too. I especially loved Fern Canyon. You walk along the stream and on wooden planks over the stream. It was wonderful, with the beautiful sound of the water babbling over the stones and the ferns on either side. 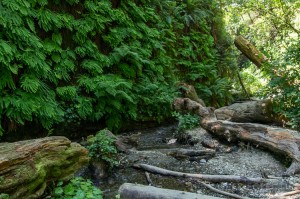 The kittens were pleased to have us home, of course, although now they’re whining at me because it is dinner time and they get wet food tonight (as an apology for us not being home for a week). The house is mostly back in order (with a few exceptions) and at some point I will get a dinner menu planned so I can go grocery shopping tomorrow.

And, of course, the planned updates for StashCache, which will take quite a bit of development work this week. I’m still working out the specifics and beginning to look at what it will all involved, but hopefully I’ll be able to get started on that tomorrow. Watch this space for updates about what’s coming!