My afghan is trundling along, and I am on the third of the four skeins.  Looking at it, I’m not sure I’m going to achieve the desired measurements.  I mean, ideally it should be almost half the full length at this point, if not more …and I’m not sure it’s over two feet.

Oh well. The advantage to using the mottled yarn is that if it doesn’t matter if I fail to match dye lots perfectly, so I can just throw more yarn at the problem to get the length I want. It is coming out thick and plush, the kind of afghan that it will be wonderful to snuggle under on a cold, rainy day. (Except for the fact that CA never gets them anymore, sigh.)  And there’s enough texture in the piece to keep it interesting, despite it being easy enough for beginner-me to figure out the pattern reading. 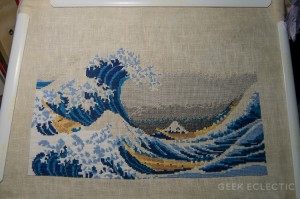 I have gotten some stitching in on the Great Wave piece.  Filling in the white isn’t very exciting, but it’s at least mindnumbingly easy? I’m trying to find some things to do while I’m working on it, but I’ve been unsettled recently and so the normal technique of audiobooks hasn’t been effective. I watched a few livestreams of tornado chasers this weekend while I got a little bit of stitching in, and that helped some. Maybe I will try to sneak in a little more today between bits of housework and planning.

Thursday saw a major bugfix done for StashCache; the app is now substantially less likely to crash if you (say) edit the quantity of the thread in the thread info page (so that it’s not in the stash anymore, for example) and then hit the back button to return to the stash list. Also, your changes will now be displayed on the list. I think that should fix the crash reported on Wednesday night, but since I wasn’t able to replicate it exactly, I can’t be 100% sure. I’m keeping an eye on the crash reports to see if it shows up again.

I’m seeing enough tablet users that getting a tablet layout designed is moving up on the list of goals, along with the sorting changes I talked about earlier. This is probably a bit off in the distance though, depending on how other life events are happening. The app, as much as I love it, pays no bills. Writing might. Something has to.